(The unknown correspondence between Franklin D. Roosevelt and Winston Churchill authorizing a top-secret convoy of 20,000 British troops to Singapore on three American transports.) 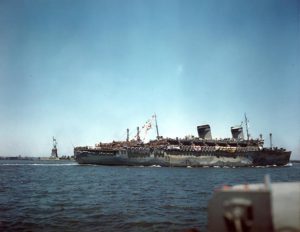 A series of “Triple Priority” telegrams between President Franklin Roosevelt and Prime Minister Winston Churchill that would result in FDR breaking the Neutrality Act, began only two weeks after the Atlantic Conference in August 1941.  As a result, FDR approved the transport of British troops to war in American ships, even as the United States remained technically at peace.

There was much to be concerned about.  Churchill’s first message to FDR on September 1, 1941 revealed doubts about maintaining Britain’s strategic Middle East situation:  “Would it be possible for you to lend us twelve United States liners and twenty U.S. cargo ships manned by American crews from early October until February…I know from out talks that it will be difficult to do, but there is a great need for more British troops in the Middle East.”  Churchill ended plaintively.  “It is quite true that the loan of these liners would hamper any large dispatch of U.S. forces to Europe or Africa, but as you know I have never asked for this in any period we can reasonably foresee in the near future.”

The President replied by telegram on September 5. ” I am sure we can help you with your project to reinforce the Middle East army…we can provide transport for 20,000 men.  These ships will be United States Navy transports manned by Navy crews.  Our Neutrality Act permits ships of the Navy to go to any port.”  In referring to the Neutrality Act’s permissions, Roosevelt was being too clever by half.  Subsequent legislation would permit the arming of U.S. merchant ships, but neither the original act nor its revision authorized the transport of a belligerent’s troops in U.S. ships.  The law had to be evaded.  On October 5, in reconsidering the political risk to him, FDR wrote Churchill with a new plan.  The 18th Division, he said, should sail from Liverpool to Halifax in British, not American, bottoms, then transfer to U.S. Navy ships in Halifax.  On December 12 1941, the convoy now well at sea, Churchill urgently notified Roosevelt, “We feel it necessary to divert 18th Division now rounding the Cape…to reinforce army we are forming against Japanese invasion of Burma and Malay.”  The President immediately replied, “I am in entire agreement and orders have already been issued for the diversion of the convoy as requested.”

For more than 7,000 of the 18,000 Tommies it would be a one-way trip.  One of the three American converted ocean liners that made the voyage was the former SS America, renamed USS West Point (photo).