(ANOTHER VERSION OF THIS COVER FEATURE, MY FIRST ARTICLE,ORIGINALLY APPEARED IN THE CHICAGO SUNDAY TRIBUNE MAGAZINE, OCTOBER 24, 1965. THIS IS THE 50TH ANNIVERSARY REPRINT )

The Midway, along with Jackson and Washington parks, comprise Chicago’s most enduring reminder of the 640 acre fair that placed the dynamic young city on the world map, attracting 45% of America’s entire population to the glittering “white city.” But it didn’t start with the great fair. Almost 23 years before the April 1, 1893 opening of the World’s Columbian Exposition, Frederic Law Olmstead, dean of American landscape architects, had already proposed a system of parks and boulevards to cover the prairies and marshes 7 miles from downtown Chicago. 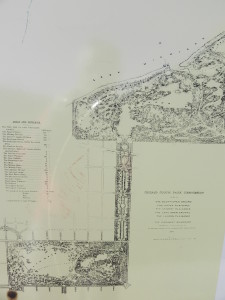 At the invitation of the South Park commissioners, Olmstead designed (L) two large parks of almost the same size, one extending along Lake Michigan and the other parallel to the first but one mile to the west and connected by a 700 ft. wide grassy esplanade Olmstead platted as the “Midway Plaisance,” because it was situated between the two parks. The lakeside area became Jackson Park, later to become the location for the 1893 Columbian Exposition, and the other park was named for George Washington. 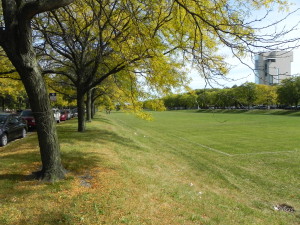 Although the massive exhibition buildings drew millions, it was the connecting strip with its 26-floor rotating wheel, the first ever, that drew the greatest attention. (L) 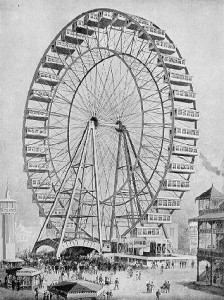 Located in the center of the Midway and visible for miles, engineer George Washington Ferris, a last-minute entrant in the competition to propose an attraction comparable to the 1889 Eiffel Tower, presented a radical design to skeptical officials that would immortalize both his name and the daring of his plan. The Midway and the 264 ft. rotating bridge – the world’s first Ferris Wheel – would become part of American and world culture.

After the fair, the eminent Chicago sculptor Lorado Taft, envisioned a dramatic re-use of the now famous but empty Midway (L). All of it would be transformed into a mile-long canal surmounted by three Parisian-like ornamented bridges. Along the canal’s tiered sides, statuary groupings would represent civilization’s great thinkers and artists.

To view and be astonished by the display, passengers on electric boats or hand-made Venetian gondolas would traverse along the canal’s entire length from near the Illinois Central tracks on the east to Cottage Grove on the west. The new attraction had an additional benefit of unifying two separate parks into one enormous green space. At the time of Olmstead’s death in 1903, excavations for the canal had already hollowed-out the entire center of the Midway end to end, as Taft completed the most audacious part of the plan to be the first of its type anywhere. Each end of the re-purposed Midway would be crowned with two immense and powerfully dramatic fountains, one portraying a realization of creation based on the classic myth of Deucalion, the Noah of Greek legend, who with his wife Pyrrah, were the only mortals saved by Zeus from the great flood. At the west end, the Fountain of Time would represent man’s passage through life as viewed by the inscrutable figure of time itself. In its breath-taking totality and grandeur, the Fountains of Creation and Time would enclose the canal, its bridges and statuary and its awed visitors in a mystical embrace of life and eternity. 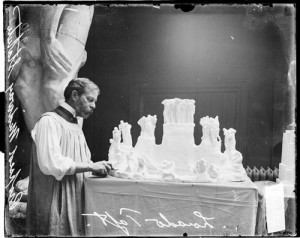 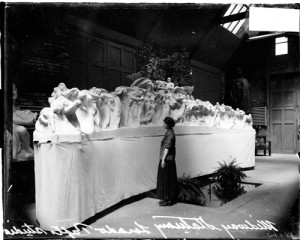 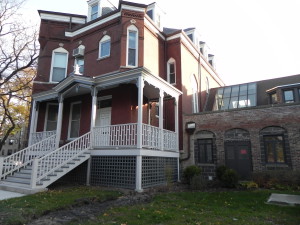 Beginning in 1910 from his airy Ingelside Ave studio (L) adjacent to the Midway, Taft first produced in plaster a quarter-sized scale model of each work, from which the full size monuments would be cast from hundreds of individual forms, all produced from life poses in the studio. Interrupted by World War One, it would take another five years to complete and install a full-size plaster model of the Fountain of Time near Cottage Grove. After approval by the South Park Commissioners, Taft unexpectedly decided on an enhancement for the finished work. It would be clad with a previously untried concrete aggregate mixed with quartz-like pebbles from the Potomac River. The finished fountain would then glow invitingly day and night, or so it was thought.

But Taft’s plan was now delivered a near fatal setback. The Belle Epoque art era was over and funding nearly ended. The canal, already partially completed, would never be filled with water from the Washington Park lagoon. The great bridges would never inspire future generations, and the Fountain of Creation would never occupy the east end of the Midway or anywhere. But the Fountain of Time. the most important of the two monumental works, was approved with construction taking-on a new urgency; finish it before it was also canceled. The slurry mix was hurriedly shaped over the full-size hollow forms, now presenting as ghostly entities on the muddy Midway’s west end, perhaps causing speculation from university students as to its final appearance. Little did Taft or anyone know that time itself and Chicago weather would later take their toll, but that was in the future. Now it was 1922 and the vast work (below) was finally in place, dedicated, and revealed to the city and the world. 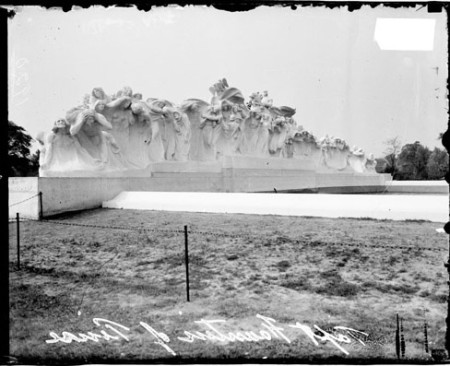 Taft’s allegorical portrayal of humanity, his sermon in stone, began with the appearance of a single figure emerging from a wave, suggesting the water origins that gave birth to all. 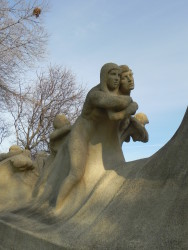 The figure then evolved into a loving couple (L), then to family groupings, children at play, and other individual figures, all journeying as if in lock-step across the monument’s entire 125 feet in front and equally across the rear. Its scores of moving figures had separate beginnings, but all were destined for an identical and inevitable conclusion.

As Taft visualized it: “I saw before me the mighty crag-like figure of Time…watching the endless march of humanity surging in a wide circle around the form of the lone sentinel, and made up of the shapes of hurrying men and women in endless procession ever impelled by the winds of destiny in the inexorable lock step of the ages.” 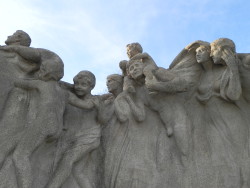 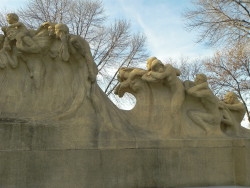 As new waves and new figures joined the procession, a kind of uniformity or collective purpose became clear. Both as individuals and as members of a group, all were on the same journey. 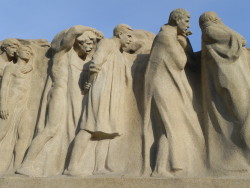 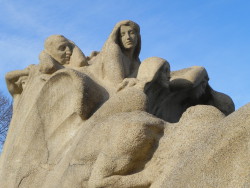 Taft’s homily to humanity had a clear message: while life has meaning and purpose, it also has a conclusion that all share equally. Thus, in the rear, Lorado Taft, head bowed but resolute,(L) hand in hand with his Italian assistant, became part of the same ensemble of movement and conclusion. Finally, at the end of the progression, the final figures, aged, lame and fearful, their arms outstretched in contemplation of achievements or failures, now faced another certainty.

While Taft’s magnum opus affirmed the belief that life should be well and truly lived, he also inserted another dominating, all-seeing presence somewhat apart from the main grouping, but one that perceived every action. Its invincibility represented another type of certainty and it could never be vanquished or refuted. It was forever. It was Time itself.

Ironically, the passage of time, the very continuum whose spiritual values he molded in stone, finally defeated Taft’s effort to reshape the Midway into an unsurpassed expanse of art and grandness. The neglected and decaying masterwork then endured decades of deterioration resulting from the imperfect process of its construction and scant public attention. (TWO IMAGES BELOW)

Now, nearly a century later, walk the Midway and imagine what it almost became. Stand at the base of the statue to Jan Masaryk at the east end where the Fountain of creation was to spill its waters into the canal and look down its long green expanse. The sunken center of the Midway is still there, while the location where George Ferris’s great wheel once stood is now a seasonal ice rink. Then, at the edge of the Midway, in shabby magnificence, appears Taft’s great Fountain of Time, now alone, out of place and forgotten. It stands in review before the inscrutable figure of its mentor, Time. Cars hurry around its expansive base, the occupants unknowing of its purpose. Are they curious about why such an immense work is on the Midway? The dream awaits fulfillment. 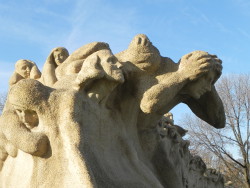 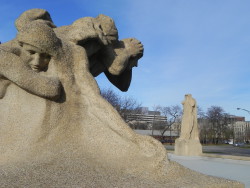 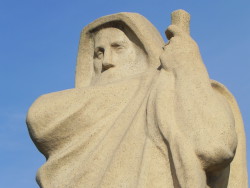 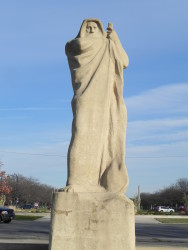 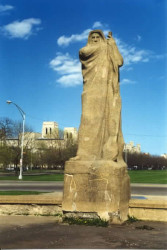 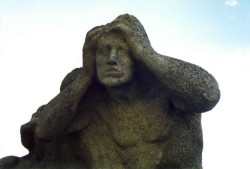 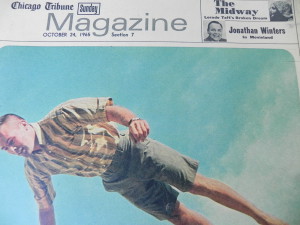 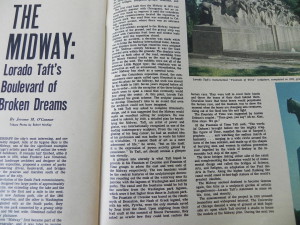 It was my first article and it showed; I’ve gotten better since, and for this anniversary reprint, I also re-edited some of my less than soaring 1965 rhetoric. But there is also the good fortune of having determination and the right idea at the right time as factors.

The cover lede and four inside color pages at a time when people actually read newspapers resonated with many of the Chicago Tribune million plus Sunday readers and, most especially, with the Chicago Park District. They were the nominal but unknowing landlords of Lorado Taft’s greatest work, which also includes the Fountain of the Great Lakes in the south garden of the Art Institute of Chicago.

Not long after the feature’s publication in the then high-quality Tribune Sunday Magazine, I was contacted by the Chicago Park District administration and asked to address its Board of Directors at their Christmas Eve annual meeting in Chicago’s Field Museum of Natural History. I vigorously pleaded for restoration of the great fountain, then in a severely deteriorating condition. (2 images above before restoration). After the conclusion of the three-minute presentation I was approached by a board-member, a short, rather undistinguished appearing elderly man. “We will appropriate money to restore the fountain,” he said, “and it will start in the spring.” He added something else; “Young man, you should be in politics and in the Democratic party. Call me.” It was Col. Jacob “Jake” Arvey, the decades-long national, state, and local political kingmaker, and a favorite of then Mayor Richard J. Daley. I never accepted Arvey’s meeting invitation to follow a political path and never regretted it either, But looking-back decades later the possibilities make for interesting speculation. 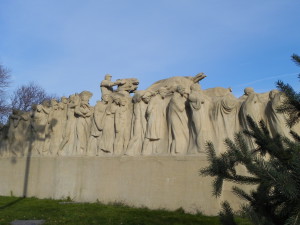 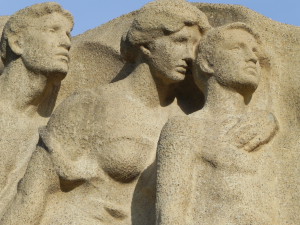 Only a year later the Fountain of Time was indeed stabilized and rededicated, this time with the Chicago Fire Department Band, Mayor Richard J. Daley, and Sen. Paul Douglas making the dedicatory remarks, with myself also in attendance and rather astonished by it all. It was the first of several restoration’s that included much-needed floodlighting and repair of the water-filled basin.

Although I have no journalism training, that first article served as the impetus for many more to come, resulting in being awarded the year 2000 U.S. Naval Institute “Author of the Year.”  It continues to the present day as adjunct instructor in adult continuing education at 3 Chicago area colleges, and forty-three years as a Chicago tour guide. Also unchanged is a continuing quest to locate and report on the still-existing places that changed or made history, and that are essential to a decades later re-examination of the living history of our times. Invariably, these places have been overlooked by other historians or considered as no longer existing.  As the features on this site demonstrate, the places that time forgot are very real indeed.  Jerome M. O’Connor.