Overcoming perhaps the longest delay in Hollywood history, the celebrated Steven Spielberg and Tom Hanks team resume shooting in London in March 2021 of MASTERS OF THE AIR, a book highly recommended by this author of THE HIDDEN PLACES OF WORLD WAR II.  Lauded and awarded with numerous Emmy’s for Saving Private Ryan (1998)Band of Brothers (2001), and The Pacific (2010), Spielberg considers Masters of the Air as part three of his masterful recreations of the war.

The air war over Europe was the longest battle of the war with the highest proportion of casualties of any of the armed forces.  One in five of the B-17, B-24, and Lancaster crews never returned.  U.S. casualties alone were over 26,000 airmen.

Rumored to cost well north of $200 million, ‘Masters’ will not only be one of the longest films ever in production, but among the costliest.  Planned as a mini-series of ten episodes, it is likely that main characters will be followed throughout the series and that, as is Spielberg’s custom, they will not be well-known names.

For the millions eagerly awaiting the series, expect an even longer wait.  While a release date has not been announced, it could be as long as December 2022 and exclusively on Apple TV.   But there is also good news.  Why wait?

For an advance preview with never seen then images of the Eighth Air Force and their bases then and now, several at which Masters of the Air will be filmed, go to Amazon for THE HIDDEN PLACES OF WORLD WAR II, now back in stock. The author, award-winner Jerome M. O’Connor, took decades to fully research the real and existing places that survived both the war and mention in thousands of books about World War II.  For a free read of book parts go to the author’s secure web site, www.historyarticles.com. 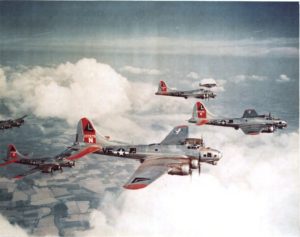